If you follow on social, you might have seen that after being in St. Thomas, I jetted off to Jackson Hole for a week in the mountains for a press trip to celebrate the opening of a new hotel in the area, Mountain Modern Motel. The trip was jam-packed with exciting, adventurous activities and I got to meet some pretty awesome people, too. All around, it was an amazing week and a lot of my time was spent outdoors doing things where I didn’t have service. I have to admit that it was super nice to sort of unplug for a bit!

I’m excited to share with y’all more about the awesome place I stayed + what we did! Mountain Modern Motel (MMM) just opened up last month in Jackson Hole, Wyoming. The concept is SO cool and I hope this blog post is able to somehow do it justice because I really did enjoy my stay so, so much! I’ll admit, the word “motel” sort of threw me off a bit at first, but I’m telling you…it’s not like most motels at all. In fact, now that I’ve gotten a little taste of the brand and have actually stayed there, I can confidently say that Mountain Modern has totally revolutionized the stereotypical idea of staying in a motel.  At least the “modern motel” that they are going for – and did darn well. Basically, they took a standard motor inn – or what a motel usually means – focused on the best aspects, and dressed it up a bit. It’s not some crazy huge fancy hotel, but instead, a place that matches the heart beat of Jackson Hole. It was designed and is run by people who live and are from Jackson, so it has a very “home-y” feel to it, plus you feel really connected with all the area can offer – something you don’t always get when isolated to a hotel. And the size was perfect – I think they said about 130 rooms, so it’s big enough to have all the awesome amenities but you aren’t stuck in some giant hotel, ya know?

My parents were actually able to join me on this trip (so fun!) and – much to my surprise – were actually big fans of the place, too. The simplest way for me to explain the experience is that MMM did all the important things right. And not just right, but done well too. I can honestly say that my expectations were exceeded. The vibe of MMM

The attention to detail in the design and build-out of the place was really impressive with MM – yet still in-line with the rustic mountain vibe of Jackson Hole, too.

First off, the design and aesthetic just felt…simple and comfortable. In the best way! There wasn’t clutter, and everything was very minimal, which I appreciated. But it was also super chic and cute! I loved all the little design details like the buffalo check and red throughout the rooms, lobby, and overall branding of the place. Well done! 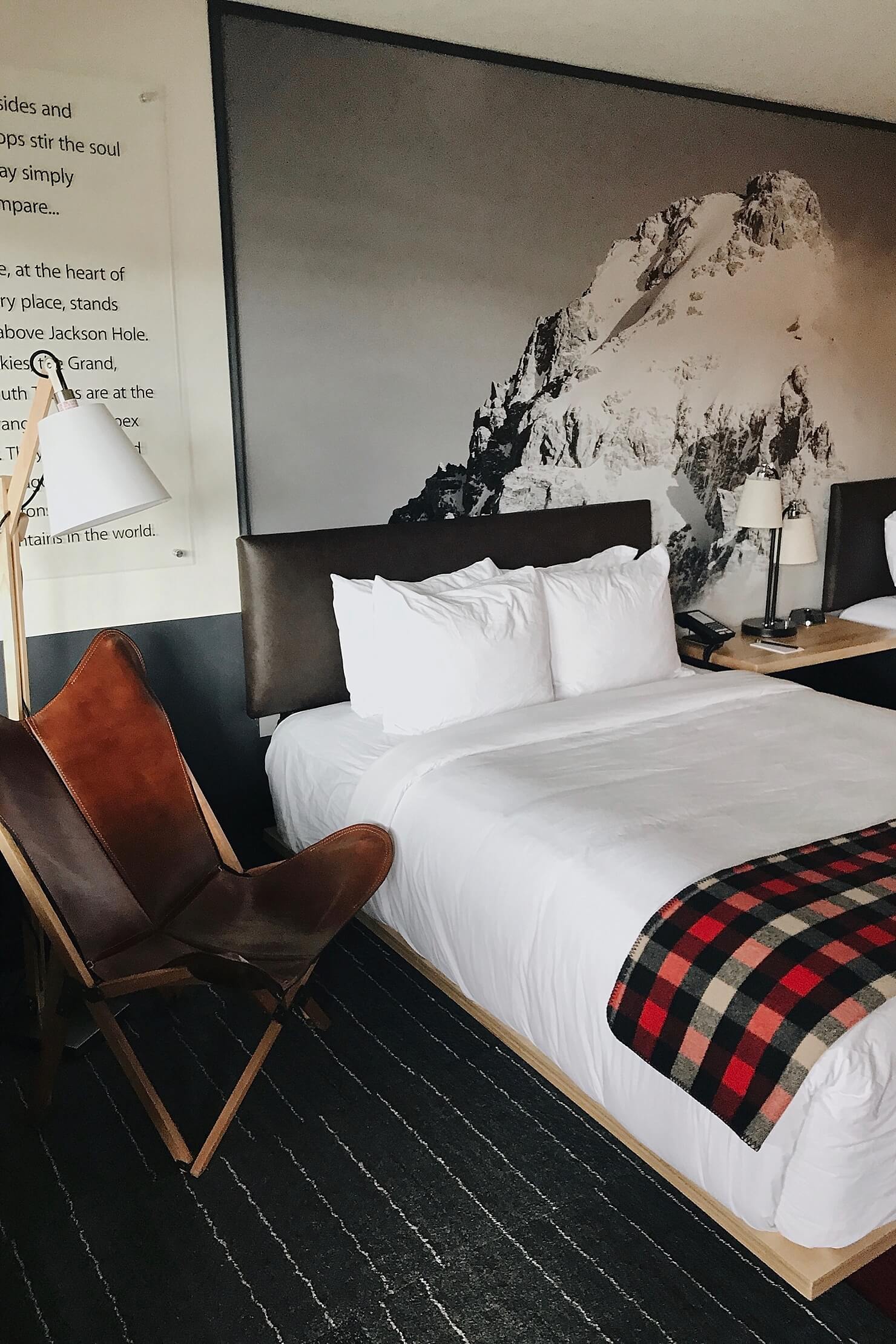 The beds were some of the most comfortable hotel beds I’ve ever slept in (and my parents said the same thing), and since I travel so much, this is saying a lot. A huge plus to me. And maybe my favorite part about the hotel itself was the working space in the lobby – but not a stuffy one. They had lattes and a bunch of space for me to sprawl out and bust out some work. Not a dingy “office” like some hotels. It felt like home and that I could totally do my thing. I dunno, I appreciated it! The service was also ah-mazing. Everyone from the cleaning crew to the front desk was attentive, kind, and helpful. I loved them! We obviously wanted to do a lot of outdoorsy things since Jackson Hole has so much to offer and is beyond gorgeous, but we weren’t sure where to start (outside of the press activities). Luckily, there were these awesome oversized maps in the lobby for plotting adventures, so we started there. The MMM is right in the middle of town so it was totally easy getting everywhere. There’s SO much to do in each season in Jackson.

What we did in Jackson Hole

Like I mentioned, this was a press tour, so some of the itinerary was planned for us, which ended up being really awesome! But we didn’t have to be go-go-go the entire trip; they definitely left time to relax by the motel’s fire and explore the restaurants around the place. There was even a distillery that we tried and LOVED. So cool! On the first night of the trip, we visit Jackson Hole Winery which was so fun – not only was the property beautiful but the wine was AMAZING! And we got to see how they make it too, which was a really learning experience. I loved getting to know the family behind it and hear a little more about their story. My favorite wine was their newest one, which is called “Outlaw” if you’re ever in the area and want to try it out! The next day we ventured out to Jenny Lake which was (as you can tell) GORGEOUS! We went on a boat ride to see more of the area – it was such a dream and so relaxing. But I’m so glad I brought an extra sweatshirt and rain jacket because the temperature dropped like 20 degrees while we were out there and then it started raining (and even hailing too!) after being beautiful and sunny just that morning. So if you’re planning on going, you HAVE got to pack layers and definitely bring rain gear just in case. The locals say this kind of sporadic weather is totally normal in Jackson. Horseback riding in the Tetons with one of my favorite humans on this earth, my Daddy :) The last thing we did was the brand new Via Ferrata rock-climbing experience at the top of Jackson Hole Mountain – it was amazing! It was definitely challenging, but so, so worth the effort for the experience. I would definitely do it again and think it would be really fun to do with a group or my family. OH, I think I forgot to mention, my parents, boyfriend, and I headed up to Jackson a few days before the official “press trip” started and were able to do a little exploring (and major relaxing actually) on our own. To be honest, we spent most of our time eating, drinking wine, and laying out by the pool. The one adventurous thing we DID do was go on a hot air balloon – which was AMAZING and such a great experience! This photos (above) is a shot I took with my iPhone of one of the views we got to see while in the hot air balloon – so gorgeous right?! We were trying to get a good photo while in the hot air balloon but that lighting was super harsh (#typical) so this was the best we could get! My dad’s pretty good with that iPhone, don’t you think?! Here’s trial No. 2 below… We took my sister’s rec (and several of y’alls too!) and went to the Blue Lion for dinner and it was AH-MAZING!! So so good! And thanks to all of YOU who gave amazing recs in my instagram comments as well! You guys are the best! This place did not disappoint! All in all the trip was amazing and I’ve decided I need to take more trips like this – where my phone doesn’t work in most areas because it’s so remote. It was actually super refreshing to (be forced to) disconnect and unplug for a little bit while experiencing Jackson. I can’t wait to go back!

PS:: If you’re planning on booking a trip to Jackson, let me know! And if you’ve got a trip planned in the near future and want to stay at MMM, you can use code BRIGHTON to get 30% OFF (up until the end of this month!)

What I Wore in San Miguel

My Favorite Restaurants in Aspen