One of the most common questions I get is how I’m handling the transition from 1 kid to 2. I’ve heard such varying answers from different people on this topic. Some parents think it’s easier than the first child, others think it’s harder. I think it’s so subjective.

I wanted to share my thoughts regardless. As I’m writing this, Blake is only 4 months old, so I’m still fresh into the “mom of 2” game — and I feel like there are some parts that have been easier and some that have been more challenging for sure.

Honestly, I think so much of the transition depends on how far apart your kids are. When Blake was born, Four was just turning 20 months old. I’m pretty sure any mom will tell you that this age gap is all hands on deck and a little chaotic at first. I know it will be worth it though. I’ve always loved having a sister so close in age to me (we are 11 months apart). 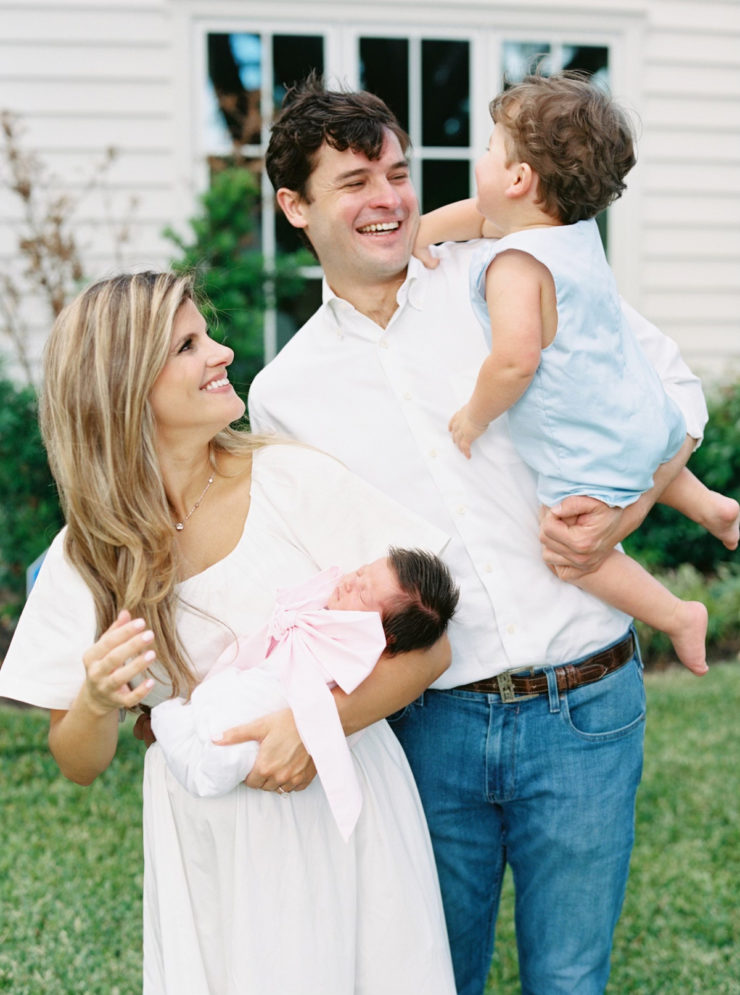 In the morning, I like to feed Blake her bottle before Four gets out of his crib so I can focus on Four and get breakfast made for everyone. Luckily, Blake will usually go back to sleep after her early morning bottle. Sometimes I have her in a bouncer though while I do the morning routine with Four. I wrote a full blog post on what a day in our life currently looks like here if you want to see the chaos in action.

How I Handle Nighttime Routines

At the newborn stage, infants don’t get a bath every night. Four does though because it’s part of his routine and helps him get in the mindset for bed. Plus, it’s his special time with either me or Duncan one on one. This is key to managing our nighttime routine a little better because one of us will typically hang with Blake while the other bathes Four.

The Biggest Challenge of Having 2 vs. 1

For me, going back to work has been the trickiest part. When I had Four, we immediately had a nanny to watch him, and I was able to fully go back to work after 6 weeks or so. We still have the same nanny watching Four, but they leave almost every day to go do activities. And although I know our nanny could take the baby too, I feel she’s too young at this point. So right now, I’m taking care of her in the mornings, and then getting my work done in the afternoons. I’m thinking about getting a temporary sitter to watch her during the mornings until she’s about 6 months old.

It’s also way more difficult to leave the home with 2. It was really easy to just throw Four in the car to run errands, but now with 2, I often rethink if it’s worth leaving the house. That’s just me though, some moms have no issue with the extra logistics. I’d just rather stay home unless I can get another set of hands. I’ve gotten almost all of our groceries delivered except for a few times I took Four and Duncan stayed home with Blake. It’s just NOT worth it with both kids right now, especially while Four is still learning to communicate.

I’ve noticed we can’t necessarily get a sitter as easily since there are now 2 kids to care for with different routines. I’m a lot more nervous the first time we have a sitter since there is so much to explain and go through.

What’s Been Easiest Going From 1 to 2

Despite everything I listed above, I actually think going from 1-2 kids has been easier *for us* than going from 0-1. Maybe it’s the fact that Duncan and I had JUST gotten married before getting pregnant with Four or that we didn’t know anything about parenting before we had him, but that was such a learning experience for us.

As tough as it can be to juggle 2 kids (and the logistics are way more challenging), we at least know what we’re doing. We’ve kept a child alive for (almost) 2 years now, and all of those panicky, paranoid newborn moments are slightly less scary with the second child.

Seeing Four with Blake also makes EVERYTHING seem worth it. It melts my heart every time I see them interact or he wants to help clean her bottles in the sink. He’s turning into the best big brother (most days lol) and as exhausted as we may be with 2 kiddos under 2, it’s also just the best.

Our Trip to the Solage Resort In Calistoga

A Day In the Life As a Mom of Two

The Leggings Four Wears Every Day